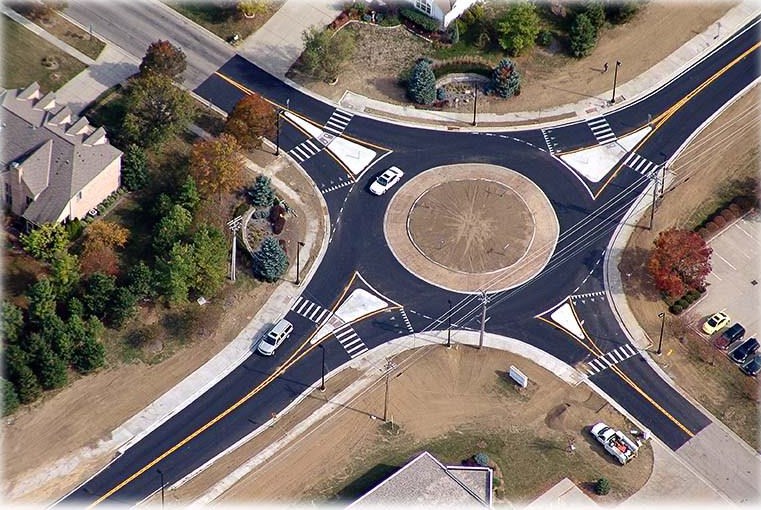 As part of our safety program, Tempe proactively identifies potential locations that could benefit from the implementation of traffic safety measures. Roundabouts are circular intersections that move traffic counterclockwise around a center island. Roundabouts are being used nationwide because of their proven safety benefits and reduced maintenance costs. They also have sustainability benefits since they do not require electricity or ongoing maintenance of equipment like a traffic signal.

The intersection of Grove Parkway and Priest Drive was identified as a location in need of improved traffic control. Historically the City has used traffic signals as the preferred traffic control measure at intersections. This location is different due to the curvature of both Grove Parkway and Priest Drive. One solution is the construction of a roundabout as an alternative to installing a traffic signal.

The configuration was designed to create access in all directions, improve connectivity and facilitate traffic flow. It includes a landscaped gateway island along with bike treatments and pedestrian crossings.  It operates without a traffic signal, except for a streetcar-specific signal to allow the vehicle to move through the intersection from the Tempe Beach Park stop.

Design solutions were developed to realign the intersection of First Street/Ash Avenue/Rio Salado Parkway.  The roundabout allows for westbound travel on Rio Salado Parkway through Ash Avenue to First Street. Preliminary concept designs were completed with a study conducted in 2009. The project was identified as a need for connections to the neighborhoods and development occurring west of downtown Tempe, and will provide another east/west travel option in and out of downtown Tempe. Several design alternatives were presented to the public for feedback during spring 2017. In May 2017, the Tempe City Council selected a roundabout design for the intersection. At the Sept. 7, 2018 Tempe City Council meeting, staff provided an update on the project, including the refined roundabout design, right-of-way impacts and estimated costs. The project is being coordinated with the Tempe Streetcar project construction to limit construction disruption.

An open house was held for the McKellips Road and College Avenue roundabout on Aug. 28. Public comment was available online from Aug. 28 to Sept. 11, 2018. Read the comments PDF. View the draft design concept PDF.

An open house was held for the Grove Parkway and Priest Drive roundabout on Sept. 26.  Public comment was available online from Sept. 26 to October 10, 2018. Read the comments PDF. View the draft design concept PDF.

View the draft design concept for McKellips and College PDF.