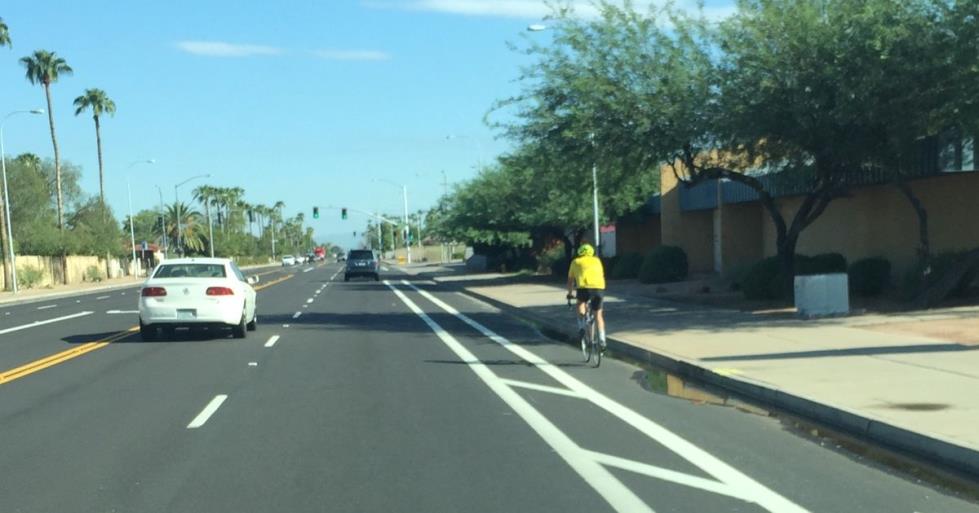 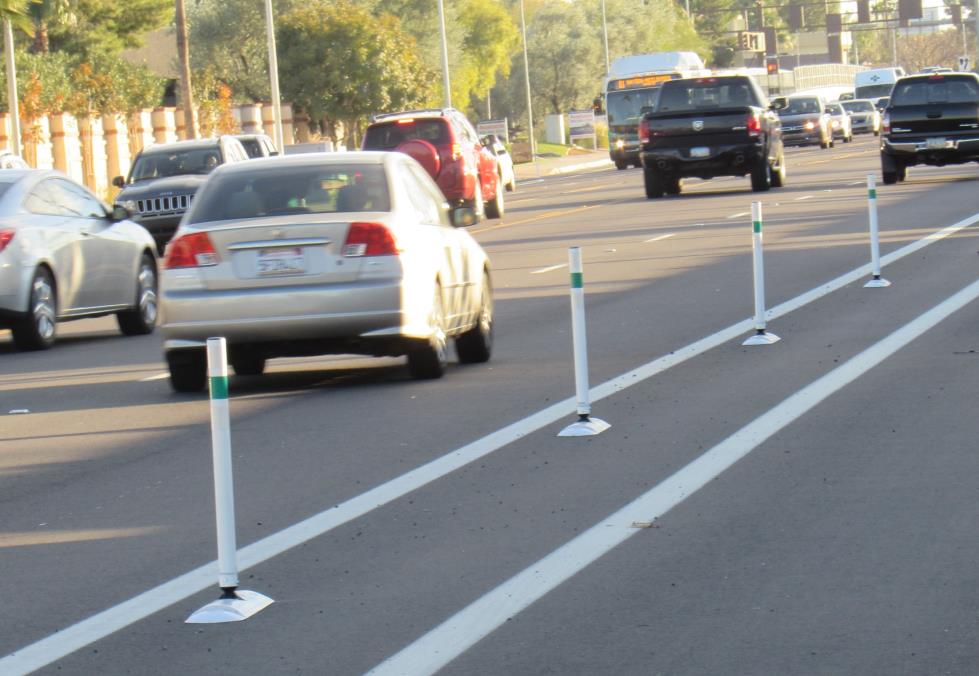 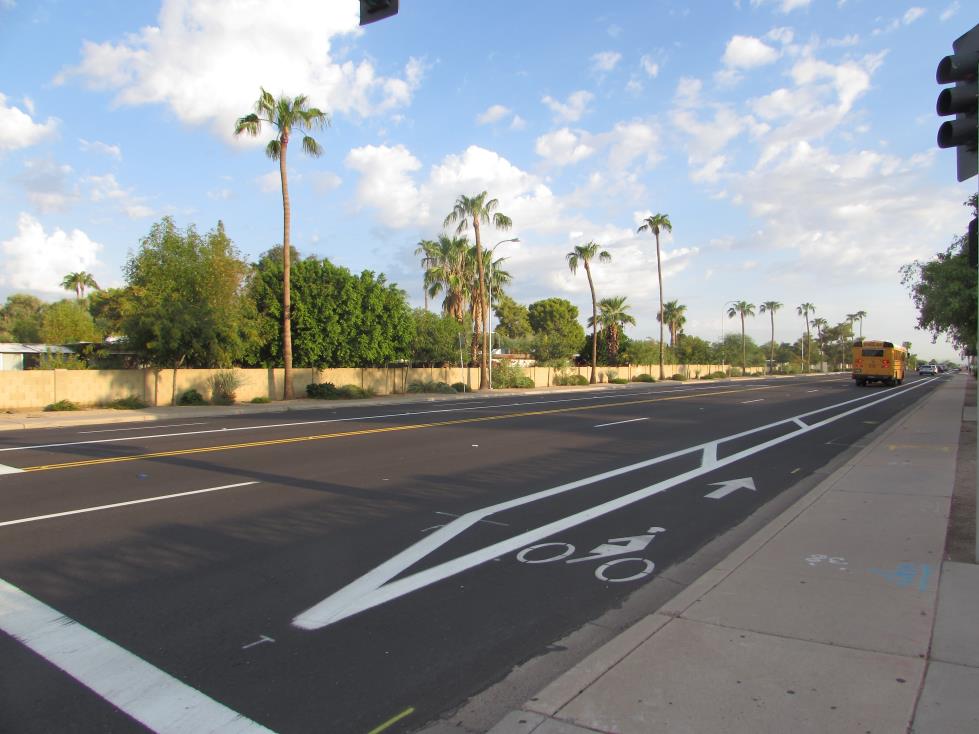 Background: In 2015, McClintock Drive between Broadway and Guadalupe roads was repaved as part of Tempe’s Asset Management Capital Maintenance Program.  As part of this repaving project, McClintock Drive was reconfigured to include bike lanes on each side of the street, which required the removal of at least one vehicle lane on McClintock Drive.  A minimum of two vehicular lanes, northbound and southbound, and a middle turn lane was maintained, as well as medians/center turn lanes and formal turn lanes at the arterial intersections. The total paving project cost was $1,704,547 of which $115,000 was spent on striping the roadway.

In response to resident feedback, at the Sept. 7, 2017 City Council Issue Review Session, staff presented alternatives for McClintock Drive. Councilmembers approved a plan that included having both bicycle facilities and additional vehicle lanes between Apache Boulevard and Baseline Road.

Latest News on Design and Construction of McClintock Drive

Construction is anticipated to last about 9 to 12 months.

Southern to Baseline: Add third southbound travel lane. Restripe northbound and southbound to include buffered bike lanes (3-foot buffers). No widening (striping only). Southbound bike lane would be standard at US60. Completed in early 2018.

Open houses were held May 12 and May 16, 2018  for residents to view design concepts for the street configuration of McClintock Drive in the northern section of the corridor from Del Rio Drive to just north of Apache Boulevard. Staff provided information on the construction process and timeline to add back in a third southbound travel lane, while maintaining bicycle access. View design concepts here PDF. Read the comments PDF.

A public meeting was held for residents who live along McClintock Drive between Southern Avenue and Baseline Road, comments were taken about neighborhood access from April 10 and April 24, 2018. View the PowerPoint from the April 10, 2018 neighborhood meeting PDF. Read the comments PDF.

In December 2016 staff was directed by the City Council to conduct a public input process to present options to the street like narrowing travel lanes, widening the street in some areas in order to add an additional vehicle lane, removing the buffer between the traffic lane and bike lane and creating concrete barriers to separate the bike and vehicle lanes. Public meetings were held March 25, 2017 and March 28, 2017, and online public comment was available March 25 to April 5, 2017.  To view data about bike counts, travel times and traffic counts, click here PDF.

November 2016 - Since making changes to McClintock Drive in summer 2015 that included adding bike lanes and removing vehicle lanes, the City of Tempe has been collecting data along with feedback from the public. More than 70 people spoke during the Nov. 3, 2016 City Council Work Study Session telling councilmembers how they feel about the changes, and city staff provided an update on the project including data on use of the bike lanes, traffic volumes and safety. Councilmembers heard a wide variety of opinions from community members, including those who said the bike lanes have made commuting by bicycle safer and more convenient, as well as some nearby residents who said the changes have increased traffic congestion and commute times.

March 2016 City Council Issue Review Session Documents PDF At the March 17, 2016 work study session, the Tempe City Council received an update on recent changes made to McClintock Drive that included removing vehicle lanes in order to add separated bike lanes. The report included data on use of the bike lanes, traffic volumes and signal timing, as well as public feedback. In response to the March 17 project update and extensive feedback from residents, the City Council directed staff to continue collecting data and report back in approximately in November with a detailed analysis of the impact.

December 2015: As part of Tempe’s commitment to providing travel options for all modes of transportation, the city built on its recent reconfiguration of McClintock Drive by adding “candlesticks” between bike lanes and vehicle travel lanes. The city installed candlesticks, vertical barriers, along McClintock Drive between Southern Avenue and Baseline Road to create more of a separation between bikes and vehicles. Tempe added the candlesticks as a pilot program to address concerns that drivers are using the bicycle lanes for vehicle travel.  The city is observing driver and bicyclist behavior to determine their effectiveness.

Project History:  McClintock Drive between Broadway and Guadalupe roads has seen traffic volumes, on average, decrease by a total of 22 percent since 2004.  This decrease is largely attributed to the completion of the urban freeway network and an increase in the number of commuters choosing alternative modes of travel. View fact sheet PDF. The addition of bicycle lanes continues Tempe’s longstanding commitment to sustainable transportation and providing streets with accommodations for all modes of travel. The removal of vehicular traffic lane(s) in order to accommodate bicycle lanes is consistent with the Transportation Master Plan, which was approved by the City Council in January 2015 after a year-long public involvement process that identified McClintock Drive as a candidate for bike lanes. Sections of arterials streets that accommodate similar volumes of traffic (25,000-35,000 vehicles/day) with two travel lanes in each direction include: