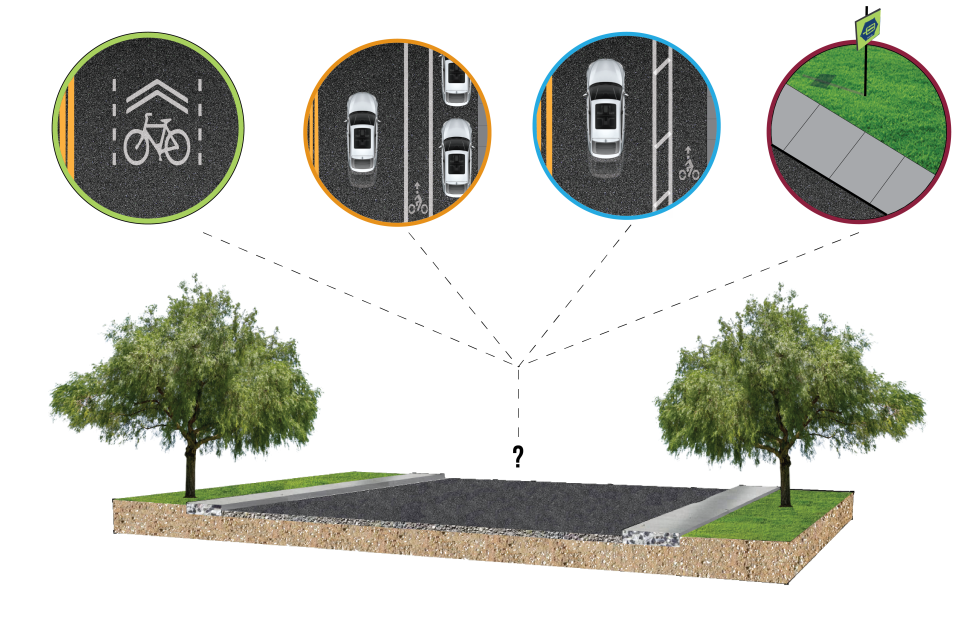 In fall 2017, the first phase of Tempe’s Bike Boulevard system branded as BIKEiT (Bike in Tempe) was implemented. Those four routes included the Brake, Pedal, Spoke, and Handlebars routes. Currently, the Spoke and Pedal routes are fragmented along College Avenue from the US60 to Cornell Drive.

As part of a scheduled pavement project through Tempe’s Asset Management Capital Maintenance Program that will be occurring on College Avenue south of Baseline Road, staff explored potential striping only improvements to the segment between US 60 and Cornell Drive to provide continuous bike facilities.  Alternatives included shared-lane markings (sharrows), bike lanes and signage. No vehicular travel lanes will be removed to accommodate any of the proposed striping changes.

For the segment between the US60 and Baseline Road, there were four alternatives presented to the public which included:

Out of the 136 total responses for this segment of College Avenue, 47% favored the buffered bike lane solution, followed by 26% favoring bike lanes with parking on one side of the street. Since the buffered-bike lane solution would remove the existing condition of on-street parking along the corridor, staff sent out an additional targeted survey to residents living directly adjacent to College Avenue to hear from those most impacted by the potential parking removal. Six responses were received, indicating a strong opposition to removing the on-street parking adjacent to their homes. The second least desired option was adding the buffered bike lanes. Given the input from the residents adjacent to College Avenue, the design alternative featuring bike lanes and parking on one side of the street  along this segment of College Avenue was moved forward.

South of Baseline Road to Cornell Drive, three alternatives were presented which included:

There were 112 responses received for this segment of College Avenue which identified bike lanes with parking on both sides of the street as the preferred alternative by the majority of residents.

Improvements to College Avenue will be in conjunction with the repaving of the street from Baseline to Guadalupe roads which is scheduled to begin in summer 2020. Once complete, there will be continuous bike facilities along College Avenue from Cornell Drive near Kiwanis Park to Apache Boulevard at ASU.  Residents will be notified two weeks prior to the start of construction.

This segment of College Ave. is scheduled to be repaved as part of Tempe’s Asset Management Capital Maintenance Program.