A Brief History of the Water of Tempe Town Lake

Filling of Tempe Town Lake began for the first time on June 2, 1999. Later that summer, on July 14, the lake stretched to 220 acres in surface area and was declared officially full. Water to fill the lake was supplied by a portion of Tempe’s annual allocation of Central Arizona Project (CAP) supplies. CAP water headed for Tempe Town Lake entered the Salt River Project (SRP) System at the CAP SRP Interconnect Facility (CSIF). From there it traveled through SRP’s canals and laterals finally making its way to Tempe Town Lake.

The City of Tempe manages seepage at Tempe Town Lake by utilizing a three-tier system of containment and recovery technologies. These efforts are focused primarily on minimizing the amount of water lost to channel seepage – water that leaves the lake laterally by permeating the levees. The reach of the Salt River through much of the Salt River Valley contains flood control channel levees constructed of cement stabilized alluvium along the banks of the river. These levees form a low permeability barrier around the sides of the lake that restricts the lateral loss of water. Much of the lower levee along the two miles of Tempe Town Lake has been covered with a structural and aesthetically attractive lake edge. Below this levee is an underground cement-clay cutoff wall that connects to shallow bedrock around the western perimeter of the lake. The purpose of the cutoff wall is to prevent lateral seepage below the river channel. On the eastern end of the lake, where bedrock is much deeper, a system of clay and concrete liners, installed onto the Salt River channel, help to minimize seepage losses during the period when the lake transitions from nearly empty to full.

The final system consists of the 10 seepage recovery wells.

The recovery wells are located in the areas where seepage recovery is feasible. In the remainder of the lake, where the levees rest on or close to bedrock, lateral seepage is handled by the techniques described previously.  In the upstream extent of the lake, recovery wells capture and recirculate almost 100 percent of water lost to Salt River channel seepage.

Tempe Town Lake is part of the Salt River channel and, as such, is subject to receiving water from upstream. Inflows into Tempe Town Lake can result when water is released from the SRP dam systems into the lower Salt River or precipitation creates local runoff.

The dam system that forms the Tempe Town Lake was designed to handle a wide range of water flows, including occasionally large floodwater events on the Salt River and Indian Bend Wash. Prior to construction of Tempe Town Lake the Salt River was channelized and deepened to allow safe handling of the maximum expected 500-year flood event in this reach of the river. Two levee systems were constructed: A cement stabilized alluvium lower levee designed to handle a 100-year flood event (about 180,000 cubic feet per second) and a rock gabion upper levee designed to contain the 500-year flood event (about 250,000 cubic feet per second). 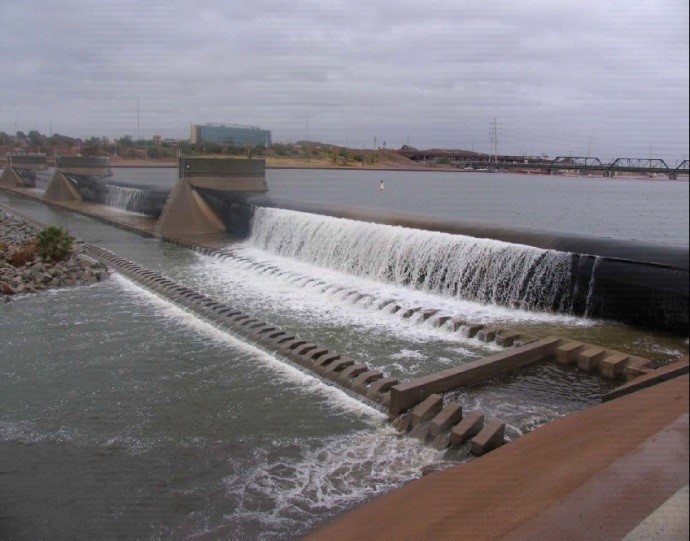 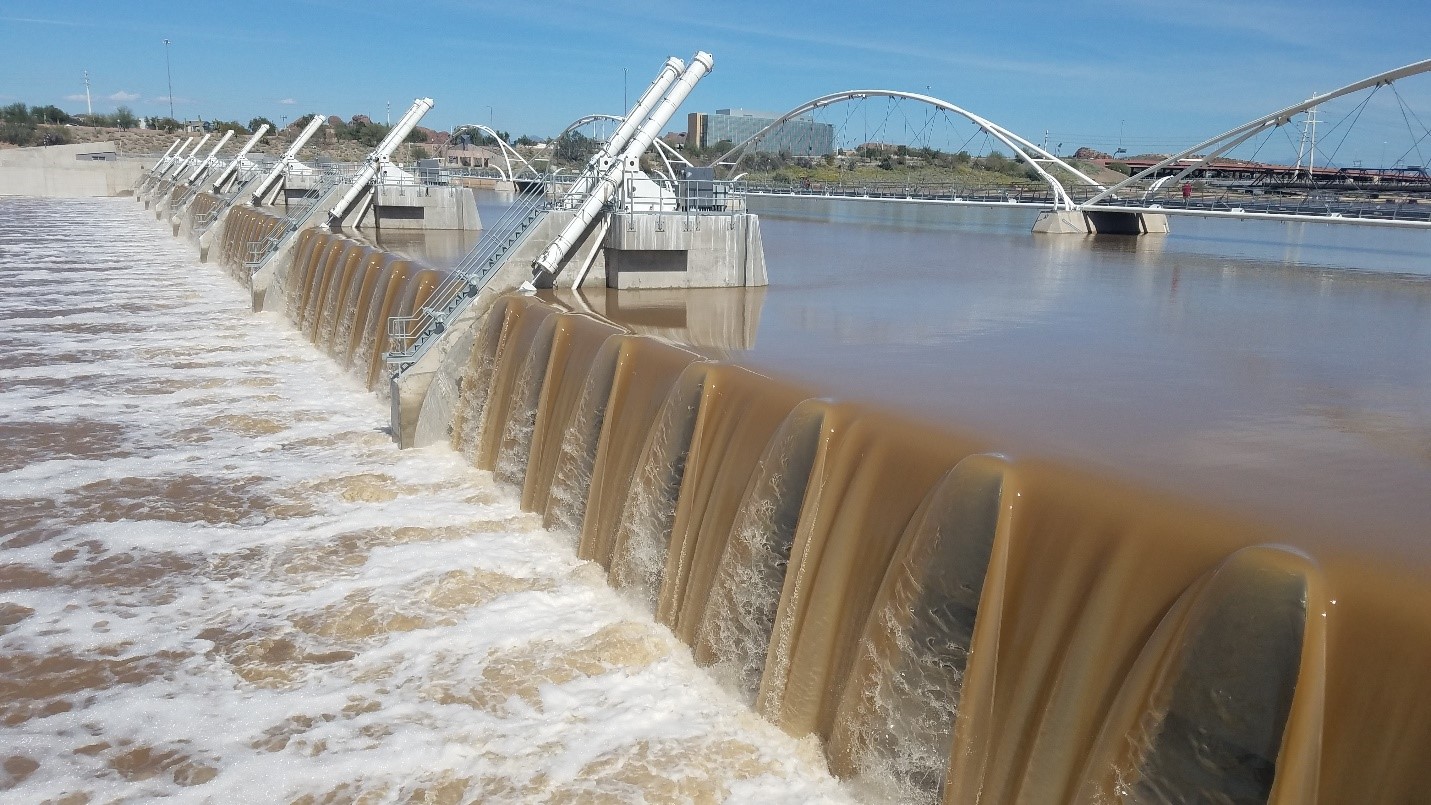 Tempe selected a steel gate dam for many reasons, primarily due to harsh desert environment’s effect on the former rubber dams. As was the case with the original dams, the new steel gate downstream dam can be lowered safely, allowing flows entering Tempe Town Lake from the Salt River upstream to pass through and continue downstream virtually unimpeded.

Information about Tempe’s Town Lake’s new Dam can be found at the Town Lake Dam webpage.

Although Tempe Town Lake typically appears static and unchanging, it is important to recognize that it lies within boundaries of an active river system. 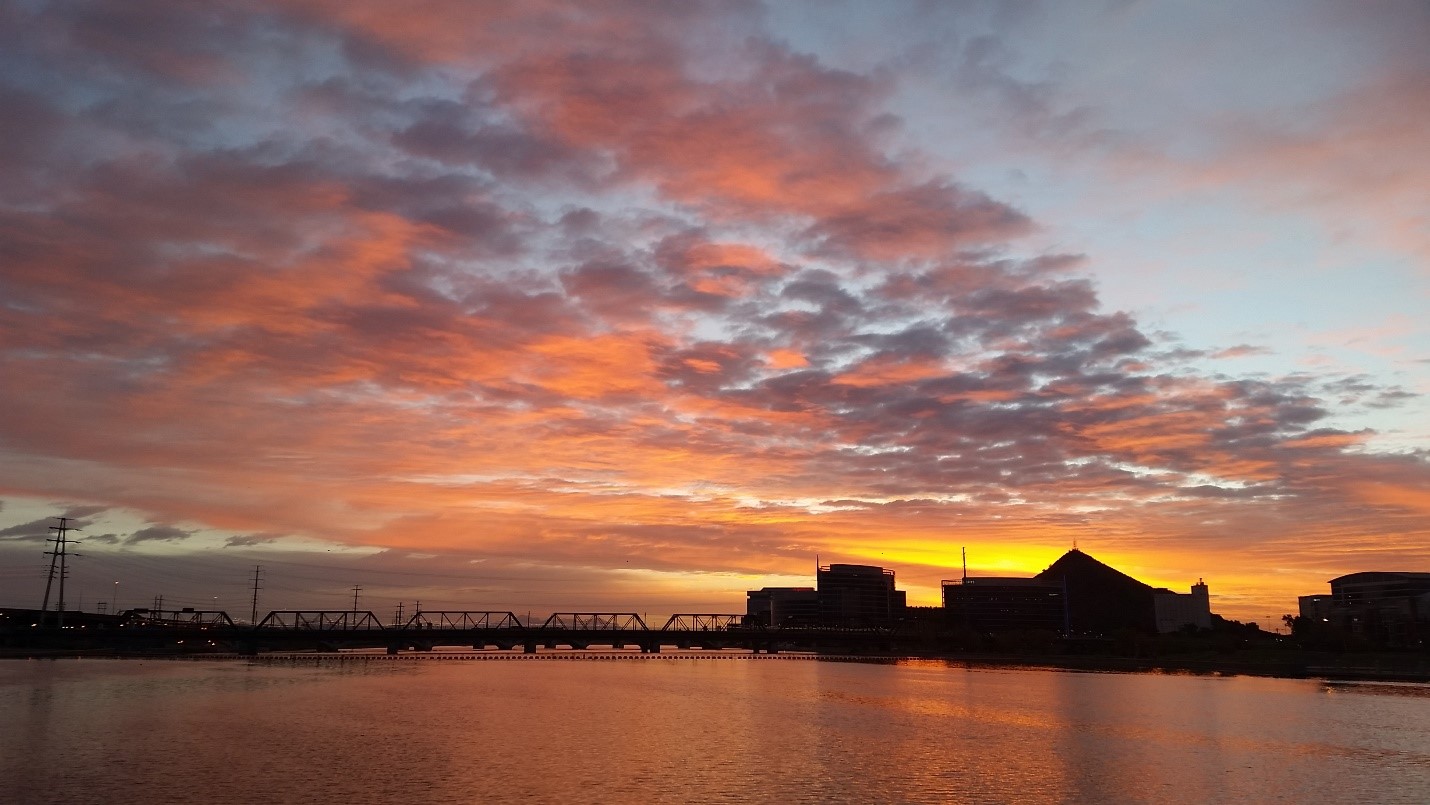 In 2018, Tempe Town Lake was expanded to allow recreation on a larger programmable area of the lake. Currently, public recreation is allowed on the lake in the area that stretches from the downstream buoy line to the Maricopa County Flood Control District (MC FCD) grade control structure near McClintock Drive.

When storms produce significant precipitation in and around Tempe, stormwater runoff can enter the lake. The largest and most visible source of stormwater inflow is from the Indian Bend Wash. Less frequently, inflows can enter the lake from releases by SRP above Tempe Town Lake on the Salt River at the Granite Reef dam. Regardless of the source of the inflows, the automated system that controls the dam will raise or lower the steel gates to maintain a constant lake level. In this way, Tempe Town Lake dam provides flood protection for the City and a safe and stable location for recreation. The gauges at Priest Drive and Curry Road can be used to measure the water passing through Tempe Town Lake. This data is available by clicking on Salt River at Priest Drive and Indian Bend Wash at Curry Road.

In late 2004 through early 2005 the lake received its first sustained upstream inflows from a series of winter storms on the Salt and Verde River watersheds. Runoff from the storms filled SRP’s reservoirs, requiring releases or spills from these reservoirs over Granite Reef Dam and down the lower Salt River. The flow through Tempe Town Lake peaked at more than 44,000 cubic feet per second and continued at various rates through April 2005. The inflatable dams operated well and according to design during this period, passing inflow during peak flows and recapturing water at the tail end of the flood event.

The 2004-2005 flood event and subsequent flood events along the lower Salt River had a profound effect on Tempe Town Lake water operations and water management practices. Prior to this period the Salt River channel upstream of Tempe Town Lake was generally dry. The lake received little to no inflow from the ephemeral Salt River. All water required to maintain lake levels during this period was delivered by outside sources through the SRP canal system or from Tempe’s seepage recovery wells. With minor exceptions, the riverbed in Tempe and upstream has remained relatively constantly saturated with periodic inflows. These variable inflows have come to constitute a significant source of makeup water for Tempe Town Lake. When inflows are not sufficient or dry periods persist, Tempe can utilize supplies from CAP or NCS or exchange reclaimed water to maintain lake level and make up for evaporation losses.

Tempe has developed and continues to improve existing infrastructure and water supplies necessary to meet the needs of a growing population. Using a combination of technology and innovation, Tempe developed a plan of operation for the Tempe Town Lake that combines techniques for operating the lake as a natural ecosystem to the maximum extent practical, while minimizing the amount of water lost to seepage, and managing inflows and pass-through flows to reduce or eliminate the need for supplemental evaporation replacement water supplies.

Free viewers are required for some of the attached documents.
They can be downloaded by clicking on the icons below.