IMPORTANT NOTICE FOR TEMPE RESIDENTS!
Your trash and recycling pickup days are changing beginning Feb. 3. More information is available on the city’s website at tempe.gov/SMART or by calling Tempe 311 at 480-350-4311.

These bladders were removed in 2016 and a steel gate dam system was installed.

The location of the Rio Salado dams was somewhat determined by the $40 million Flood Control District of Maricopa County channelization project in 1989. Grade control structures were constructed at two locations in the Tempe portion of Rio Salado: one between McClintock Drive and Rural Road, and one between Mill Avenue and Hardy Drive. The Tempe Town Lake was designed to take advantage of these structures.

The bladders were made of three main elements:

Each section of dam, or bladder, was about 240 feet long, weighed 40 tons and was more than one inch thick. 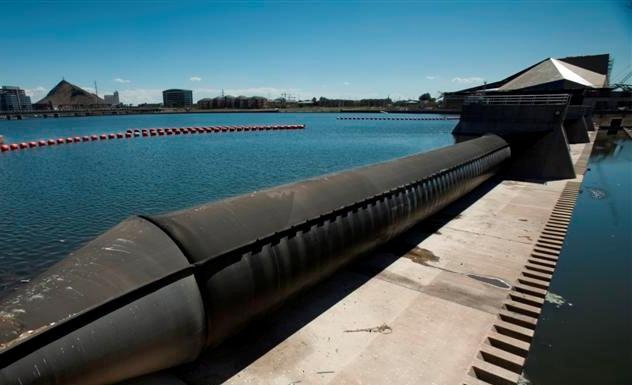 Each section of rubber was imbedded with a fabric mesh and ceramic chips and was designed to resist tearing. The rubber also contained a self-sealing material to re-close small holes. These dams resisted floodwater and debris flowing at 250,000 cubic feet per second (the highest recorded flood in Maricopa County is 200,000 cfs. in 1905. The most recent significant water release was recorded at 129,000 cfs. in 1993).

The dams were shipped across the ocean from Japan, arriving on large spools, that were transported by truck to Tempe. These spools were stored until construction of the lake was ready for installation of the bladders. The spools were then moved by crane into the river bottom, and unrolled into place.

Soil cement was used to stabilize the channel banks and rock gabions were installed to create a second levee. The flood control levee was designed for a 100-year flood event, or 215,000 cubic feet per second, with an additional four feet of freeboard (levee space, above this water flow). With improvements to Roosevelt Dam, the capacity to contain flow within the channel is as high as 280,000 cfs. The purpose is to keep all water within the flood channel, which is why there is no construction within the levees.

One of the unique features of the inflatable dams was their ability to deflate quickly and easily to prevent upstream flooding. They were able to be lowered in 30 minutes.

Why Did We Replace the Inflatable Dam?
The inflatable dams were warranteed for 30 years, however, just a few years into their lifespan, repairs were needed. In 2007, the City of Tempe negotiated with Bridgestone a new set of bladders and free installation, with the understanding that a new technology would be chosen and installed by 2016.

In July, 2010, one of the bladders ruptured causing Town Lake to drain. Fortunately, construction had already been hired and were ready to start the replacement process the very next day. While it took more than a year to receive the first set of bladders needed to open Town Lake, Town Lake was able to replace all the bladders and reopen in just three months due to good planning and negotiations.

The City of Tempe underwent a survey of dam technologies that would allow the lake to act like a river when necessary. A steel gate dam system replaced these bladders. This dam is expected to last at least 50 years.