Who Were the Hohokam?
The name Hohokam (pronounced with the accent on the last syllable) comes from the word Hoohoogum, the name given by the contemporary Native Americans in this area to the prehistoric peoples whom they claim as their ancestors. The Hohokam people occupied the valley and much of southern Arizona from A.D. 1 to 1450. 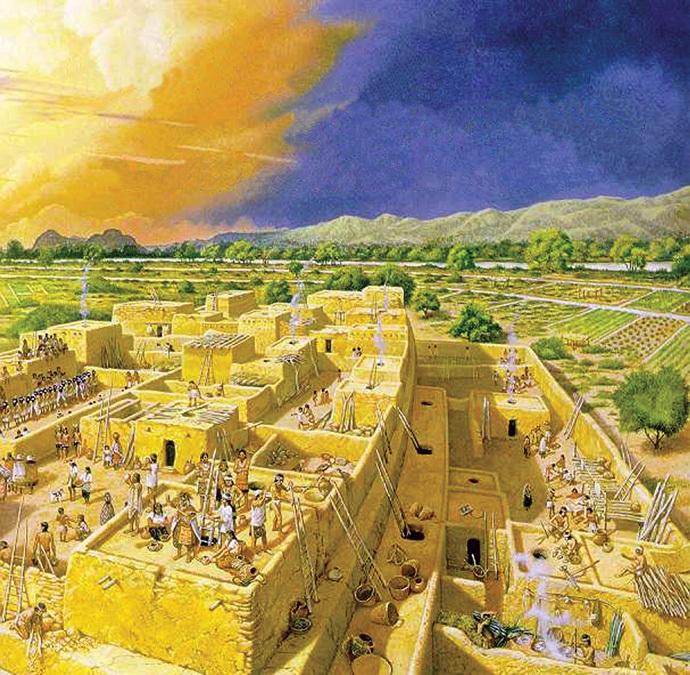 Michael Hampshire’s rendering of the large platform mound at Pueblo Grande on the north bank of the Salt River.

Their Culture
The Hohokam were farmers who grew corn, beans, squash and agave. They also grew cotton for textiles. The Hohokam built hundreds of miles of canals throughout the valley to irrigate their agricultural fields. Some of these same canals were later re-excavated and used by pioneer farmers in historic times. The Hohokam had no domesticated livestock. They hunted game such as deer, rabbit, and quail. They harvested shellfish and fish from their canals.

The Hohokam made pottery and stone tools, and wove cotton textiles. They also created hundreds of petroglyphs on rock outcrops throughout the valley.

The Hohokam had no form of writing. However, their social and political systems appear to have been quite complex. The canal systems were large public works projects that required organization and cooperation between communities. Construction at this scale would have required leaders to organize the construction and ongoing maintenance of the canal systems.

The Hohokam canals were very well engineered, as later discovered by European American farmers, indicating that there probably was division of labor between the “engineers” and the laborers who did the digging. It is likely that some communities, and therefore their leaders, dominated others by controlling access to the source of water for the canals. As a result, some leaders probably gained political power over several communities.

It is believed that these leaders lived in the communities that had platform mounds and ball courts that were used for ceremonial games, trade and other special occasions when several communities gathered together.

Where Did They Come From?
The Hohokam migrated north from what is now Mexico and settled in southern Arizona. There is strong evidence that they maintained ties with communities in Mexico. Trade items such as parrots and copper bells have been traced to their origins in Mexico. There is no evidence that the Hohokam worked copper themselves so they must have traded the finished products.

What Happened to Them?
Various theories have been proposed over the last century to answer this question. One theory states that they migrated back to Mexico, possibly after an extended drought in Arizona. Another theory proposes that they remained here and evolved culturally into the Akimel O'odham (formerly known as the Pima) and/or Tohono O’odham (formerly known as the Papago).

A more contemporary theory states that the Hohokam culture actually was composed of many different ethnic groups operating under a single cultural, economic and political system. When this system broke down (the reason still not entirely clear), each group went its separate way culturally. Some groups may have migrated elsewhere.

There is still a great deal about the Hohokam culture that archaeologists do not fully understand. Archaeologists continue to conduct research in order to fill in the gaps in their knowledge and answer the many questions that remain.