In 2017, the City of Tempe refreshed its classic “T” logo for the first time in 30 years, to include more colors and a dynamic interior.

Few people may remember what the city used to represent itself before the “T” came to be.

From 1971 to 1987, the city logo was a circular seal that had been created for the 100th anniversary of Tempe’s 1871 founding. The 1971 seal depicts the historic Hayden’s Ferry crossing the Salt River – a nod to the past – as well as ASU Gammage and the new, inverted pyramid City Hall building, which symbolized Tempe’s future.

It was that city seal that Tempe teacher Ted Dearing used to create a one-of-a-kind keepsake that has been on display in the lobby of City Hall since May 1972. Then an industrial arts teacher at McClintock High School, Dearing crafted a solid aluminum version of the seal using an experimental casting process and what was then a relatively new material available for commercial use: Styrofoam. 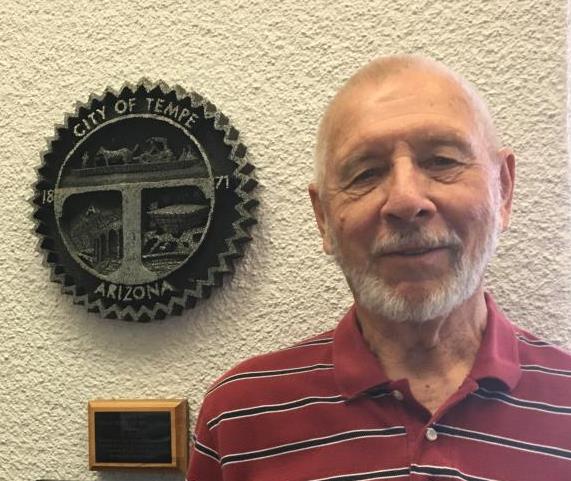 Below the seal on display is a small plaque that reads in part:

Constructed of solid aluminum by the rare cavityless casting process.

Wondering what on earth that means?

The city contacted the now-retired Dearing to explain his process. The Chandler resident even visited Tempe City Hall earlier this year to see his unique piece again.

Dearing and former Mayor Harry Mitchell had been longtime friends, attending elementary and high school together, and later teaching at the same school.

Since he was at Arizona State University, Dearing had been fascinated with the sand casting process for creating metal work pieces. He wondered what would happen if the mold was carved from Styrofoam instead of more conventional materials.

“I was curious if I could make something like that. I didn’t even know if it was going to work,” Dearing said. “I just out of the blue gave it to Harry. He did all the work of getting it placed and getting recognition for it.”

His students got to watch and help the process. To begin, Dearing got a Tempe Police vehicle decal that featured the city seal and used it to carve the pattern for the Styrofoam mold. Every feature of the seal was carved individually and fit together like a puzzle.

He pressed the completed mold into damp sand, compacting the sand all around. Whereas in traditional sand casting he would have removed the Styrofoam version of the seal and poured molten metal into the cavity, Dearing did something different. He left the mold in the sand and the searing-hot liquid melted the Styrofoam, evaporating it into the sand and leaving behind the aluminum sculpture – that’s why the process is called cavity-less casting.

Surprisingly light – Dearing estimates 3 pounds at most – the piece was then painted black and sanded with a belt sander to create a contrast between shiny metal and black areas. During his visit, Dearing noticed that Tempe’s piece has oxidized over time, as expected, but he said it could be re-sanded at any point to shine it up.

After his 20-year teaching career, Dearing made a few pieces through the same casting process for businesses, doctors and dentists around town. Today he stays busy doing part-time home service jobs and – ever the inventor – working to outfit his home for maximum sustainability, including installing custom systems for solar-powered heating, air conditioning and water heating.

“Nothing that I’ve done is particularly applicable to anyone else,” he said. “It’s still in the experimental level. It’s just a curiosity thing, I guess.”

Dearing also has built an experimental air plane and has been flying it for 13 years at nearby Stellar Air Park in Chandler.

“I can walk over to my airplane and in five minutes I’ll be flying,” he said. “I just fly for fun.”

Dearing’s experimental version of the city seal is a special complement to Tempe’s own ingenuity and progressive nature. The city is thankful to this pioneering maker of things for teaching generations of Tempe children and for crafting a treasured and lasting symbol of the community.