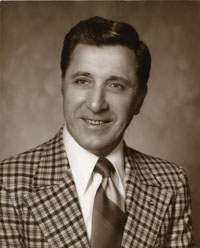 Former Tempe Mayor William J. LoPiano passed away on Sept. 28, 2015 at age 89. Before he died, he worked with the Tempe History Museum to provide an oral history of his time leading the city.

“Tempe is grateful for the many improvements to our community that Mayor LoPiano accomplished,” Tempe Mayor Mark Mitchell said. “Not only did I value his leadership and care for this city, he was a close family friend. I will miss him.”

During his tenure with the Tempe City Council, Tempe reached its current city boundaries, the current Tempe City Hall was built and Mill Avenue began its evolution into the entertainment and shopping district that it is today. He was also involved with research into rejuvenating the dry Salt River in Tempe. The end result of that work is today’s Tempe Town Lake.

Former Mayor LoPiano was also active in a variety of civic and professional organizations, including the Arizona League of Cities and Towns, the Maricopa Association of Governments, the American Chiropractic Association, Rotary International, Tempe Boys Club, and the Arizona Academy.

LoPiano Bosque, located on the north shore of Tempe Town Lake, is named after Mayor LoPiano. A photo of LoPiano and former mayor Neil Giuliano at the bosque's dedication is shown below.

The 13-acre LoPiano Bosque habitat stretches along the north side of Loop 202 between College and Mill Avenues just south of the Indian Bend Pump Ditch and Papago Park. Volunteers from 26 schools constructed this habitat in 1993. Their work transformed a very isolated area into a habitat that supports significant numbers of birds and wildlife and offers a quiet, natural experience in the heart of an urban area. 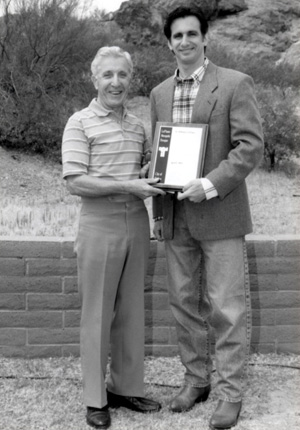