Music is an important part of the Tempe vibe. It's literally cemented into the city’s culture.

The Tempe Music Walk honors select bands,  musicians and musical venues with plaques embedded in the sidewalk on Mill Avenue. Tempe is the first Phoenix Metropolitan Area city to honor its musicians in this way.

Listen to a KJZZ interview with Walt Richardson and Councilmember Joel Navarro.

“It is appropriate that we honor our musical heritage with Tempe’s Music Walk. We are choosing musicians who have made a true difference in the culture of music, not only here in Tempe but throughout Arizona and even the world,” Councilmember Joel Navarro said. “Tempe’s musicians have earned platinum albums, had their music included in the soundtracks of award-winning TV shows and movies. They have left their marks on many generations.”

Read about the honorees.

Walt Richardson was the inaugural musician to be inducted into Tempe's Music Walk. The plaque honoring Richardson was installed on  Nov. 7, 2014 at Fourth Street and Mill Avenue on the southwest corner.

With his funky reggae sound, Richardson has been a part of the Tempe music scene for more than 30 years. Many of his original tunes include Tempe locations, such as the song, “Mill Avenue.” Richardson started out playing as a street musician with a hat that people would throw change into. He’s come a long way, with albums, world tours, an induction into the Arizona Music and Entertainment Hall of Fame and many other honors. He hosts a music show on Radio Phoenix that is nationally-syndicated on the African American Radio Consortium.

My World of Music: A Peaceful Place in Quantum Space airs from noon – 2 p.m. on Saturdays at www.radiophoenix.org.

Watch a video of Richardson singing with Francine Reed at Songwriters' Showcase.

Richardson has a true passion for helping musicians grow their talent. He is currently the host of Walk-in Wednesdays Open Mic Night at Tempe Center for the Arts, which gives singer/songwriters an opportunity to perform original music to an appreciative audience. He also hosted Songwriters’ Showcase at Tempe Center for the Arts, which airs on PBS Eight/KAET, on Tempe 11 and on many other stations as well as online. Richardson is so much a part of Tempe that the City of Tempe declared Jan. 18, 2014 to be Walt Richardson Day.

“I want to shine a light on the music and talent in Tempe and Arizona. Music connects people and local music is a reflection of our community. Our sound is different from Nashville and L.A. It’s a homegrown sound and people like it. It’s organic,” Richardson said.

The Gin Blossoms received their plaque on the Tempe Music Walk on Dec. 30, 2014, at Fourth Street and Mill Avenue, northwest corner.

The Gin Blossoms received a Grammy Award nomination, platinum and gold records and have toured dozens of countries. The band is an iconic part of the Tempe experience. Watch the band perform its song, Mrs. Rita, as part of Farm Aid and notice the ASU Sun Devil jersey that lead singer Robin Wilson is wearing.

The Gin Blossoms have sold more than 8 million records. They continue to have hit records and tour today.  www.ginblossoms.net 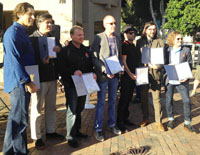 From the early 1980s through 2004, many legendary bands got their start at Long Wong's on Mill Avenue.

Ron Goldstein, originally from Buffalo, N.Y., started the Long Wong’s franchise. The Tempe location was the second to open.

Goldstein booked musicians to perform seven nights a week in the small bar. Often, people lined up outside to hear the bands because it was too crowded inside. Bands like Piersons, Dead Hot Workshop, Flatheads, the Pistoleros and the Refreshments played there.

The Gin Blossoms got their start on the Long Wong's stage then went on to sell millions of records.

Below: The Pistoleros play Long Wong's in 1997

Blues legend Hans Olson started his career in the late 1960s, with his first major concert as the opening act for the Allman Brothers Band.

With more than five decades in the entertainment business,   Olson is a veteran performer. He was a regular performer on Mill Avenue's live music scene, at Long Wong's and other locations. He has traveled the world as an artist. He sang the TV theme song for the show, Evening Shade and has had his music featured on more than a dozen other TV series', including It's Always Sunny in Philadelphia and Criminal Minds.