IMPORTANT NOTICE FOR TEMPE RESIDENTS!
Your trash and recycling pickup days are changing beginning Feb. 3. More information is available on the city’s website at tempe.gov/SMART or by calling Tempe 311 at 480-350-4311.

Get your city news emailed to you. Sign up now.

New road ahead with help from city's homeless outreach team

Paul Van Proyen appeared to have it all: A steady career, consulting work on the side, marriage and fatherhood. Aviation, his chosen field, had been a good ride.

But he also struggled with alcohol, a college-kid habit that took hold and ultimately took over. The stability of home and work gave way to a day-by-day existence on the streets.

“At some point I came to a fork in the road and I took the wrong fork,” he said.

Chronically homeless and extremely ill after more than a decade spent outside, it seemed unlikely that Van Proyen could change his direction. Until he did, with help from the City of Tempe’s HOPE team and Homeless Outreach Specialist Kelly Denman.

Today, Van Proyen, 64, is living in his own apartment, getting back to good health and volunteering in the community. Almost a year after getting off the streets, he thinks about the future and leans on Denman when he comes to a new fork in the road.

“Kelly, I trust intrinsically,” Van Proyen said. “If she tells me it’s going to snow tomorrow, I believe her.”

“Kelly’s on my front line.”

And she’s not the only one. Tempe has an ambitious goal to end homelessness and has been building up a “front line” that includes a full range of support and solutions citywide for people experiencing homelessness.

The city has been engaged in this intensified effort since 2016, focused on making measurable progress to address what is a pervasive, complicated, national issue in a compassionate way.

To do this, the city is taking a coordinated approach that brings together the Human Services Department, Tempe Police, Tempe Fire Medical Rescue, the Public Works Department and the Tempe Municipal Court.  In addition to working locally on solutions, they collaborate with regional partners because homelessness knows no borders.

The Tempe City Council also directs additional funding to this effort and pursues policy-related solutions such as a “housing first” approach to homelessness.

In many cases, the city’s work begins on a street corner or under a bridge with the HOPE - Homeless Outreach Prevention Effort – team offering everything from traditional street outreach to one-on-one case management to housing services.

For Van Proyen, that outreach began with Denman.

“How come you never come talk to me?”  she would ask.

“Why would I?” he would answer.

“I knew where I was at and I didn’t want to rock the boat,” Van Proyen said.

That place was a world away from his former life. Van Proyen said he had built a career at a midwestern university teaching aircraft maintenance and doing research. When that program folded, he said, his drinking increased and home life fell apart.

Plans to create a new life in Arizona disintegrated, along with his savings and housing. He worked sporadically in telemarketing-type jobs and tried life in a shelter, but neither stuck.

Eventually, nights were spent surreptitiously at an office complex, where he could sleep outside and clean up with a hose at one of the buildings. Days were filled going back and forth to the Tempe Public Library – a sanctuary where history and fiction books offered a temporary reprieve from the realities of his world.

In a life filled with so many highlights, Van Proyen remembered hitting a “lowlight.” He lost out on a restaurant job with just two requirements - speaking English and U.S. citizenship - for applicants. It was clear why.

“I was qualified. Being homeless, out on the streets, cost me that job,” he said.

Denman, whose office is based at the library, kept an eye on Van Proyen. Gently, she kept trying to offer help. They began taking about housing but, as his health declined, he had more urgent needs.

“I told him I think you’re going to die…please let me take you to the hospital,” Denman recalled.

What followed: a dizzying array of diagnoses, a lengthy hospitalization, life-saving treatments and a decision by Van Proyen to rock the boat. He was ready for permanent housing.

Denman connected him with the Interfaith Homeless Emergency Lodging Program (I-HELP), a shelter program in the city offered by Tempe Community Action Agency (TCAA). From there, she helped him into a subsidized apartment with connections to social services.

Denman also put him in touch with a nonprofit that provided some furnishings. When word spread about the new apartment, a library staffer donated a desk from home.

Now somewhat settled in, Van Proyen has begun volunteering at TCAA’s food pantry and the Friends of the Tempe Public Library Bookstore a few times a week. He is also focusing on sobriety and rebuilding his health. Not too long ago, it wasn’t something he thought possible. His attitude, he said, was, “I’ve got a death sentence. I might as well do it on the street.”

At 64, the future is uncertain. In his previous life, a bucket list item for the history buff might have been to retire and become a museum docent at a place like George Washington’s Mount Vernon.  Right now, Van Proyen said he thinks about how he can help others experiencing homelessness.

And he continues to spend time reading at the library.

Van Proyen's story is the first in an occasional series about the City of Tempe's efforts to help those experiencing homelessness. Read more here about city programs and services aimed at ending homelessness. 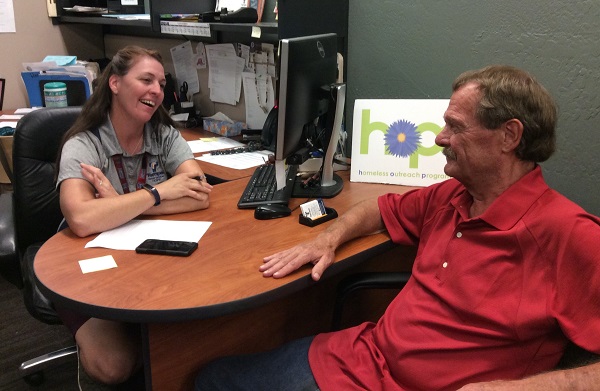