Like many young kids, Alberto Valenzuela wondered about his place in the world. Would he be a successful student? Could he be a leader someday? How could he stay on the straight and narrow?


In the noise of adolescence, would a soft-spoken kid like him ever be heard?


Yes, it turned out. Valenzuela would be heard, over and over again.


At his middle school, talking with a friend who wanted to stop drinking alcohol. At his high school, organizing activities aimed at keeping teens off drugs. At Tempe City Hall, giving his opinions on serious issues affecting his peers.


And at the Tempe Coalition, the lone teen among a group of civic-minded adults working to reduce alcohol and drug use among the city’s youth.


“In the past, I never felt that I had a voice,” said Valenzuela, 17, a junior at McClintock High School. “I felt like I was just someone in the crowd.”


“Now, I feel like I can make a difference for my peers,” he said.


For the past five years, the Tempe Coalition has been the perfect platform for Valenzuela to do just that.


Formed in 1987, the grassroots coalition is focused on helping youth reach their full potential by reducing alcohol and drug use within the city. Coalition members come from a cross section of the community, including business, civic groups, schools, youth organizations, law enforcement, healthcare, government and faith-based organizations.

The coalition operates in partnership with the Tempe Community Council, which works to address immediate and long-term human service needs in the city.


In recent years, Tempe Coalition has targeted three initiatives. The 21 or Too Young campaign encourages teens to avoid under-age drinking. Another campaign, Support Your Kids’ Interests So Marijuana Won’t Be One of Them, aims to prevent marijuana use among youth ages 12 to 18.

The coalition also pushed for and was successful in the passage of the city’s Social Host Ordinance, which makes it illegal to provide alcohol to a person younger than 21.


A new five-year grant will boost the coalition’s work, said coalition program director Hilary Cummings. The $625,000 grant, awarded through the federal Drug Free Communities Support Program, will fund continuing efforts to reduce alcohol and marijuana use. The coalition specifically wants to change attitudes by youth that smoking marijuana is not harmful, Cummings said.


Over the decades, the Tempe Coalition has established itself as a change agent and a community resource. It has also become an unlikely home for Valenzuela.


Valenzuela’s path to advocacy began with an anti-drug program at Connolly Middle School and took him to various teen leadership programs offered through the city. His mother and aunt encouraged him along the way, after seeing family members who had struggled with drugs and alcohol.


“They didn’t want me to end up with those problems,” Valenzuela said.


Then, a chance invitation to a Tempe Coalition meeting cemented his love of advocacy work. Intimidated at first by the all-adult group, he and another teen decided to keep coming back.


“We were thinking, ‘Our voice matters just as much as theirs because we’re the youth and they’re not’,” Valenzuela said.


Now the only teen member, Valenzuela continues to use his voice to help further the coalition’s work – whether explaining teens’ social media habits or chiming in on the best giveaways to offer at youth events or offering an opinion on a particular prevention effort.


“Even though a lot of us work with youth, he brings that true voice,” Cummings said.


At the start of the school year, Valenzuela took his work one step further by starting a new club at McClintock High called “It Starts With You,” which encourages teens to avoid drugs and alcohol and take another path.  About a dozen classmates joined in, and now members meet weekly to help each other stay on a good road and spread the message to their peers.


The club provides a key link for teens.

“We know that students turn to other students when it comes to making many decisions during their high school years,” said McClintock teacher and club sponsor Jane Winkle. “This club helps connect students and provides an environment where kids can support each other to make healthy decisions.”

Valenzuela is as much the busy club leader as he is a patient shoulder to lean on. Winkle is not surprised by his leadership. The teen, she said, “has a maturity far beyond his years and a kindness that radiates in everything he does.”

Valenzuela has big plans for his future – a career in law and then politics. But for now, he is focused on helping his peers make plans for their own futures. 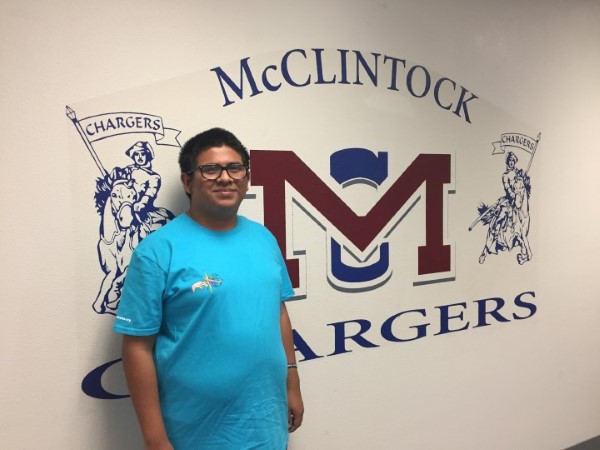