(Because of its preserve status, hikers are required to use designated trails. Please, do not use bikes on this trail. Thank you for helping us to protect this fragile resource. For more information, visitwww.tempe.gov/Amountain)

Hayden Butte got its name from Charles Trumbull Hayden - pioneer, trader, teamster, merchant, freighter, landowner and judge. He is often credited as being the founder of Tempe.

In 1858 he established a freighting business in Tucson. A few years later he left Tucson for a business trip only to find he couldn't cross the Salt River because it was running too high. He saw an opportunity for development and soon filed a claim for water from the Salt River as well as a homestead declaration for the land at the base of the butte that now makes up downtown Tempe.

He soon opened a store and began laying the groundwork for a flour mill. A canal brought water from the river to the mill at the base of the butte. The water was used to turn the grind stones. In addition, he started a cable operated ferry across the river which allowed him to move his freighting business to the area.

Across the way from the mill, he built his home, now known La Casa Vieja. By 1874 the homestead included his home, the mill, his river ferry business and his store.

In 1858 he was appointed as a federal judge for the Tucson District. He supported educational opportunities and encouraged the Territorial Legislature to build the Territorial Normal School in Tempe. He was instrumental in securing the site for the school which is now Arizona State University. 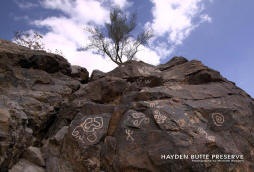 The butte overlooking the Hayden Ferry Settlement was established as a park in 1973. It is a valuable resource that includes Sonoran desert vegetation, wildlife, rock outcrops, archaeological and paleontological sites. Because of it's significant historical resources and significance, it was designated as a preserve in 2002 to protect its existence into the future while maintaining its connections to the past.